The Holidays and Wine

When we say ‘Thanksgiving’, what’s the first thing you think of? Is it turkey? Stuffing? Maybe it’s football? Family?

How about stress? In-laws? Ignoring the elephant in the room that is crazy uncle Mark?

Love it or hate it Thanksgiving is undeniably an institution and whether you wait all year for it to start or wait all day for it to end it’s arguably the most important social obligation of the year.

Are you usually the one doing the holiday cooking? Chasing the kids out of the kitchen so you can start the turkey before breakfast, staging the pie crust, boiling the potatoes, making six casseroles, three salads, gee why don’t we do this every month? Then you’ll appreciate the best thing about Thanksgiving: it’s maybe the only day of the year where it’s acceptable to have a drink before noon. 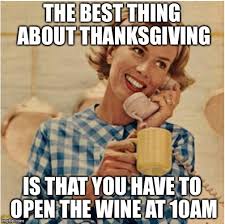 And nothing pairs better with a chaotic kitchen than a “Blow-Your-Mind” Chipotle Bloody Mary or three (no one is going to judge you – you’re the cook). Maybe even make a pitcher for those lazy lumps in the living room enjoying the parade. At any rate you’re going to need some courage because the in-laws are only a few blocks away.

Your family will again beg your for your “Secret Ingredients”, but you’ve got an ace up your sleeve – sautee’ the veggies in Jalapeno Wine, and marinade with Jalapeno Chipotle Wine.

Once the extended family arrives it’s just going to get crazier. The cousin’s kids have been cooped up in the car for three hours and now they need to chase the dog. Grandma and grandpa had a terrible flight and they’ve been fighting since they left the airport. Crazy uncle Mark is trying to explain to you how solar cells are draining the sun. Are we having fun yet? So send the kids out back to scream their heads off and everyone else gets Jalapeno Wine Lemonade! Mark gets to forget about the new world order, Grandpa gets to calm down, and you don’t get the side-eye from Grandma for serving booze on the south side of noon.

Once you’ve got the in-laws grazing at the relish plate and the grandparents waiting for football to come on, you get back to the relative peace of the kitchen right? Not likely. Mark is in here too and he’s trying as hard as he can to finish off the Jalapeno Wine (it’s hard to blame him, it’s delicious). Since he seems so intent on having a liquid lunch you might as well oblige him with bottle of his own Liquid Lunch – he’s going to have to fight your mother in law for it though, ’cause it’s a chardonnay and that’s her jam.

So it’s now 2 PM and time for dinner. (Why do we do that? Is it so the tryptophan can knock us out before the halftime show?) The table is set, the kids have slowed to a dull roar and Mark and the MIL are nice and loose and he’s doing a pretty good job explaining to her why the earth is actually flat – it’s time to eat!

So how many kinds of wine do you pair with a Thanksgiving feast? The correct answer is ALL THE KINDS! You love Merlot and you’re hoping that the MIL will have some too because it’s Lie Detector Merlot and she needs to see through Mark’s rambling nonsense. You’ve also got to have The

Minx, not just because it pairs so well with the turkey but because ever since Paul Giamotti made a movie in 2004 your bougie cousin thinks she’s too good for Merlot, but Cabernet is the new black. And then you just have to round it out with The Roxie because Mark’s crazy wife will only drink Riesling.

Everyone is watching football and you have approximately two and a half acres of dishes to do – even though you cooked (le’ sigh). You have to look at the bright side, no one want’s to help but that means you get left alone for the fist time in 24 hours. Well you’re not totally alone, you have a stack of dirty plates as tall as a small child and a (mostly) full bag of Reveler’s Rose‘ – one will help you get through the other, we will let you decide which is which.

This website uses cookies to improve your experience while you navigate through the website. Out of these, the cookies that are categorized as necessary are stored on your browser as they are essential for the working of basic functionalities of the website. We also use third-party cookies that help us analyze and understand how you use this website. These cookies will be stored in your browser only with your consent. You also have the option to opt-out of these cookies. But opting out of some of these cookies may affect your browsing experience.
Necessary Always Enabled
Necessary cookies are absolutely essential for the website to function properly. These cookies ensure basic functionalities and security features of the website, anonymously.
Functional
Functional cookies help to perform certain functionalities like sharing the content of the website on social media platforms, collect feedbacks, and other third-party features.
Performance
Performance cookies are used to understand and analyze the key performance indexes of the website which helps in delivering a better user experience for the visitors.
Analytics
Analytical cookies are used to understand how visitors interact with the website. These cookies help provide information on metrics the number of visitors, bounce rate, traffic source, etc.
Advertisement
Advertisement cookies are used to provide visitors with relevant ads and marketing campaigns. These cookies track visitors across websites and collect information to provide customized ads.
Others
Other uncategorized cookies are those that are being analyzed and have not been classified into a category as yet.
SAVE & ACCEPT
X